Tiger's Joke Box is the first episode of Season 5.

Kipper opens his door when the doorbell rings. He looks around and finds a present at his front door, wondering who let it there. Kipper sits at his table, unwraps the present, only for the present to be a jack-in-the-box, which makes Kipper fall out of his seat as it jumps and scares him. Outside through the window, Tiger laughs at Kipper, revealing that he pranked Kipper. Tiger goes to Jake’s house, who’s eating breakfast. As Tiger rings the doorbell to distract Jake, he runs through the open door in the kitchen and lays a whoopee cushion on Jake’s chair. Jake sees that no one’s at his door and goes back to eat his cereal and obliviously sits on the whoopee cushion, much to Tiger’s amusement.

Later on, Tiger encounters Pig and Arnold at the swings and offers Pig a sweet. Pig eats the sweet, not knowing that the sweet bleeds, which covers his mouth. Kipper meets up with Tiger on Big Hill, who mentions that Pig has blue around his mouth. Tiger gives Kipper a look through his telescope, not knowing the telescope has ink on it, resulting in Kipper getting ink in his eye. Meanwhile, as Jake eats an apple under a tree, Tiger shakes itchy pepper on him, causing Jake to humorously scratch himself against the tree. Soon he, Kipper, Pig, and Arnold meet up. They realize that Tiger is behind all their misfortunes, so they hatch an plan for revenge.

Tiger is sitting outside laughing at the pranks and jokes he did to his friends and starts taking a nap. While sleeping, Kipper and the others take his whoopee cushion, put a water hose in it, and lay the cushion underneath Tiger’s chair. Arnold wakes up Tiger, and Tiger explains that he pranked his friends all day using his joke box. As Tiger looks through his telescope, he sees Kipper, Pig, and Arnold, who turn the hose on, which fills the whoopee cushion with water, causing it to explode and get Tiger wet, much to the amusement of Jake, Kipper, Pig, and Arnold, who all laugh at Tiger. 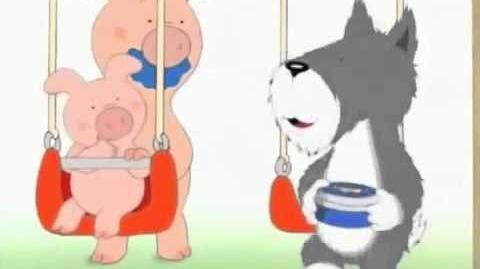 Retrieved from "https://kipperthedog.fandom.com/wiki/Tiger%27s_Joke_Box?oldid=15337"
Community content is available under CC-BY-SA unless otherwise noted.