The Visitor is the first episode of the first season.

Kipper finds a baby goose lost in a storm in the middle of the night, and decides to raise it. When the goose wakes up, his muddy feet creates a mess on the floor which Kipper later cleans up. Due to this, Kipper gives the baby goose a bath and puts a rubber duck in his bathtub which the baby goose thinks to be real and begins to fight with it. Kipper takes the rubber duck out and later gives him some cereal to eat. The baby goose pecks the cereal unlike Kipper which again creates a mess on the floor. Kipper cleans up the mess with a vacuum cleaner which accidentally sucks up his sock which Kipper thinks to be the baby goose but later he finds out the reality.

Next, Kipper reads a book about animals and their babies where he finds the baby goose's identity as a goose. Afterwards, he hears geese honking outside his window so he decides to set the baby goose free. He motivates the baby goose to fly as he was unable to fly properly. Kipper gives a final hug to the baby goose before he flies away.

The episode ends with the baby goose flying towards the sky and Kipper bidding him farewell. 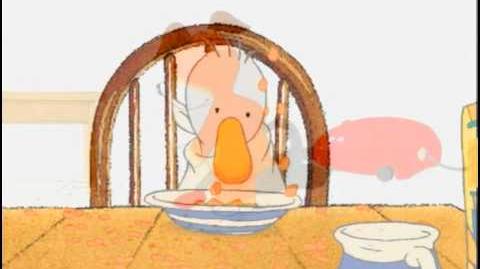 Retrieved from "https://kipperthedog.fandom.com/wiki/The_Visitor?oldid=15346"
Community content is available under CC-BY-SA unless otherwise noted.