The Umbrella is the second episode of the first season.

The episode begins with Tiger calling Kipper to go for fishing together on which Kipper replies that he doesn't own a fishing rod. Tiger suggests to bring anything longer with him to tie up the string. Kipper, on his suggestion, finds an umbrella in his store and makes his way to the river.

On the way to the river, Kipper plays around with his umbrella and gets flown with it to the moon because of the stormy day. At the end, he lands in the river where Tiger is fishing when he comes to know that Tiger has not found a single fish in his absence.

The episode ends with both Tiger and Kipper using their umbrellas as boats to wander in the river in search of fish. 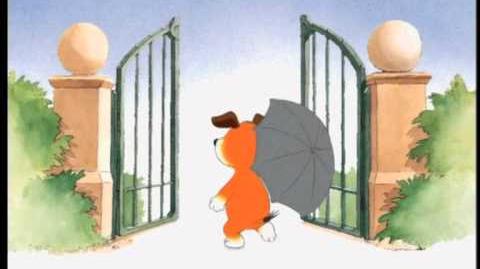 Retrieved from "https://kipperthedog.fandom.com/wiki/The_Umbrella?oldid=15354"
Community content is available under CC-BY-SA unless otherwise noted.