The Seaside is the third episode of the first season.

Kipper and Tiger go to the seaside to play at the beach, Tiger wants to build a base camp in the sand, but Kipper wants to build sand castles in the sand and paddle in the water, Kipper makes a gigantic sandcastle and puts a shell on top of it, but it is a hermit crab and keeps crawling away. Next, Kipper decides to draw a giant replica of himself in the sand. Meanwhile, Tiger is resting on the beach in the purple raft, but then the tide comes in and Tiger is swept away in the water. When Kipper notices this, he sees the duck floats in the tide and other things that he and Tiger brought with them. Then, he sees Tiger screaming for help as he is floating away in the deep water. So, Kipper gets the duck and the spade and he sails to the rescue. Next, he ties a rope to the end of the raft so he can the tow Tiger to the shore. But, the raft pops and Tiger's raft sinks. But, then the tide flows back in and Kipper and Tiger are back on the beach. Tiger sees Kipper's replica of himself and asks if Kipper will make one for him. Kipper draws a giant replica of Tiger in the sand and then they go home. 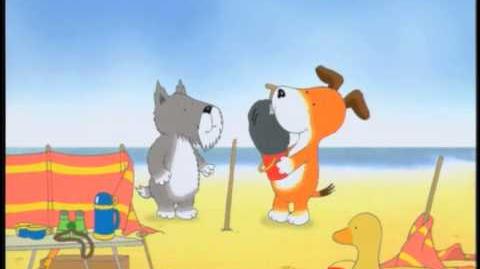 Retrieved from "https://kipperthedog.fandom.com/wiki/The_Seaside?oldid=15312"
Community content is available under CC-BY-SA unless otherwise noted.