The Rainbow Puddle is the sixth episode of Season 1.

Kipper is jumping in the puddles on a rainy day, and he sees a rainbow next to a puddle, and he finds a magic frog in a puddle. But the frog keeps on jumping away from Kipper's hand, Kipper wishes that he could catch the frog, and he wishes that he didn't have to kiss it. Then, the magic frog says Kipper's wishes are too small and Kipper says that magic things are when big things happen, the magic frog shows Kipper and they end up on the top of an elephant. The elephant drinks up the puddle.

Devastated and heartbroken by this, the frog starts crying and moping. Kipper decides to use the last wish, he whispers the wish to the elephant and Kipper kisses the frog, then the puddle appears again and the frog has his puddle back again. 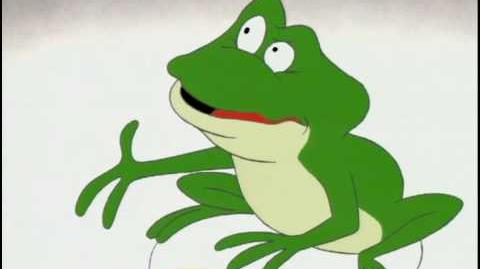 Template:Soon to be cleaned up

Retrieved from "https://kipperthedog.fandom.com/wiki/The_Rainbow_Puddle?oldid=15294"
Community content is available under CC-BY-SA unless otherwise noted.