The Purple Park Monster is the seventh episode of season 6.

The episode begins with Kipper roaming around a park and Tiger following him hiding in the bushes nearby. But Kipper soon catches him and offers sandwiches to him. Tiger is dissapointed to know that Kipper found out it was him hiding in the bushes. He offers Kipper to play a game which Pig taught him. The game turns out to be called 'pretend a monster' where one will hide pretending to be the monster and the other will catch him.

Both of them plays the game for a while with Tiger complaining that Kipper is not playing well. Later, Tiger follows a trail which he thinks to be Kipper's but he soon notices a purple figure in the bushes. Both of them runs away. The purple figure turns out to be Arnold wearing a purple costume.

Both Kipper and Tiger informs Pig about the monster who was already aware of this. Next, both of them sets a trail to trap the monster in a box. Soon, they find the monster to be Arnold set as a joke for them by Pig.

The episode ends with all of them pretending to be monsters.

The monster is similar to the Purple People Eater. 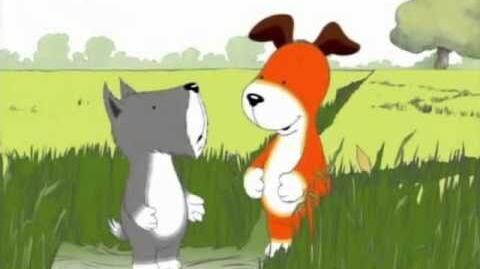 Retrieved from "https://kipperthedog.fandom.com/wiki/The_Purple_Park_Monster?oldid=15370"
Community content is available under CC-BY-SA unless otherwise noted.