The Picnic is the third episode of Season 3.

Tiger invites Kipper to go on one last picnic since it is almost the end of summer. Kipper packs jam sandwiches and cheese sandwiches and the friends jump in a pile of leaves before it is time to eat lunch. Their lunch is interrupted by Pig and Arnold flying a kite, and they decide it is too noisy so they move to the duck pond.

Unfortunately just as they settle themselves, ants decide to join their picnic, cause them to jump into the pond while the ants bite them, and then ducks begin eating their lunch as well.

After moving to a park bench, wasps swarm around them until they need to move once again. Each time they move, they lose more of their food, and never really get to eat any of it.

Once they settle themselves under the shade of a tree, Arnold and Pig join them and begin eating the food that is left. Since Kipper and Tiger are good friends, they allow the newcomers to enjoy the food, but Tiger shakes up a can of soda before offering it to Pig, which explodes when he opens it. causing kipper and tiger to laugh uncontrollably.

Pig later informs his friends about Arnold’s kite getting stuck in a tree, and Kipper and Tiger offer to help by shaking the tree to unstuck the kite. As they shake the tree, the kite falls down, but a bunch of apples fall down too.

In the end, Kipper and Tiger finally get to have their picnic, which now consists of apples. 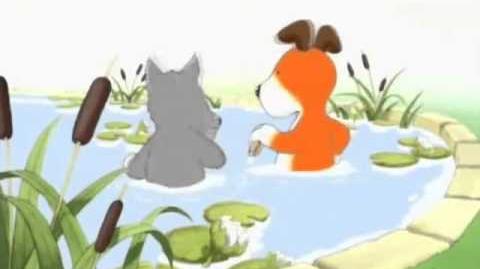 Retrieved from "https://kipperthedog.fandom.com/wiki/The_Picnic?oldid=15142"
Community content is available under CC-BY-SA unless otherwise noted.