The Missing Tape Mystery is the tenth episode of season 6.

Everyone tries to figure out why the tape for Arnold's new tape player is missing.

It's Arnold's birthday, and everyone is excited. Kipper, Tiger, pig, Arnold and Jake are dancing up the hill, singing "The Grand Old Duke Of York". After setting up the party, they open presents. Arnold receives a tape player from Pig, who suggests they play musical chairs. When he tries to play music, nothing happens. He opens up the player, and the tape, which was in it earlier, is gone. Everyone starts arguing about who's got the tape, when Tiger yells "Stop!" Tiger puts on a sergeant-like hat, and says that he'll ask the questions. He first interrogates Pig, who claims to have had the tape first, and asks Pig to tell what happened at first. Pig says he went to Kipper's house to invite him to Arnold's birthday party and show off the tape player, and claims the tape was inside the player then. In a flashback, Pig shows Kipper the tape player (with the tape inside of it then). Kipper suggests they record music on the tape, but Pig claims to not be very good with music. Kipper then gets a paper and comb, claiming that anyone can play a paper and comb. Pig then plays the paper and comb, saying that it tickles. He and Kipper then record the music. Back in the present, Tiger asks Pig if he took the tape home with him when he finished. Pig says that he didn't, which makes Tiger suspect Kipper has it. Kipper says that he doesn't have it either, and claims that he took it to Jake's house to help blow up balloons for the party. In another flashback, Kipper and Jake are laughing and blowing up balloons. Kipper says blowing up balloons makes him laugh. Jake makes them squeak, which then flys away. Tiger then arrives to make the party hats. After making the hats, They march in a parade. Jake takes the tape off the table. Back in the present again, Jake claims when they got to Pig's house, he put it on the chair. Tiger suspects Pig, asking him what he did with it. Pig says he did nothing, and everyone starts arguing again. A hiring mad Tiger yells "Quiet!" and pulls off his hat in the process...revealing the tape to fall out of his hat! Pig says that Tiger had the tape all along. A sad Tiger is upset why the tape was in his hat. Kipper says tells Tiger it's no big deal. Everyone then plays musical chairs. 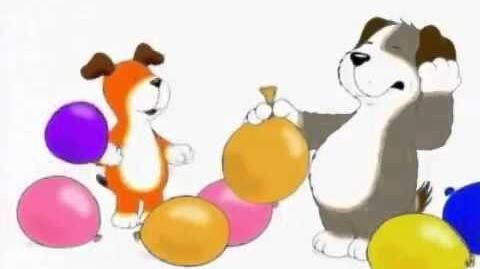 Retrieved from "https://kipperthedog.fandom.com/wiki/The_Missing_Tape_Mystery?oldid=15360"
Community content is available under CC-BY-SA unless otherwise noted.