The Dinosaur is the sixth episode of Season 3.

Kipper and Tiger are painting with their hands and feet then they decided to splash in puddles. They splash and had fun then Kipper saw muddy footprints, then Kipper saw a massive print then another Tiger thinks there's a dinosaur. Kipper and Tiger followed more footprints to the woods Kipper thought it got to sleep. Just then a noise came like a roar Tiger and Kipper ran out of the woods both were very tired. Then they saw Pig and Arnold Pig thought they having a race but instead they were running away from a dinosaur Pig said he'll get Arnold but Arnold wasn't really keen. Then Kipper noiced a print it was Arnold's skittles he made the print. Kipper said they should play skittles until the noise came back, they were frighted suddenly Kipper saw a head but it was just a digger. Everyone was happy when Arnold knocked the last pin Kipper told Arnold to do it again and Arnold nodded yes. 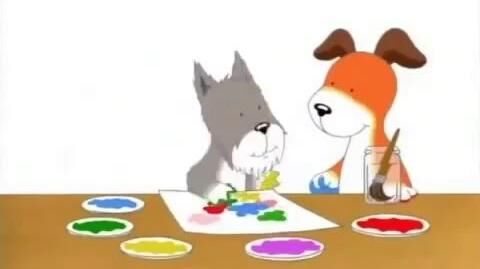 Retrieved from "https://kipperthedog.fandom.com/wiki/The_Dinosaur?oldid=15285"
Community content is available under CC-BY-SA unless otherwise noted.