The Camping Trip is the third episode of the second season.

Tiger rides his tricycle to Kipper's doorstep and he asks if he wants to go camping with him, they go camping on watership down, where a colony of rabbits live, but they have to tackle steep hills, then they get a free ride downhill. Meanwhile, the rabbits are hopping near the campsite, when the rabbits see Kipper and Tiger, they run away. Kipper and Tiger set up their tent for camping and Tiger tells Kipper to walk his way, but they end up crashing into each other in the tent. Then, Tiger sets up a barbecue and he cooks hot dogs and Kipper brings sandwiches, but the barbecue starts burning and Tiger tosses his hot dogs up in the air, like pancakes. That night, he and Kipper count stars in the sky, Tiger asks if stars go out like being switched off. Then, it starts to rain and there is a big bad storm, Kipper and Tiger hide in their tent and lightning strikes, and because of the strong wind, the pins that hold the tent break out of the grass, causing the tent to blow away! Kipper and Tiger go in different directions to get out of the rain. Tiger falls down a rabbit hole and Kipper does, too, they meet a family of cute rabbits and one of them gives Kipper a carrot, Tiger asks if he can have one too, and they both get Carrots. 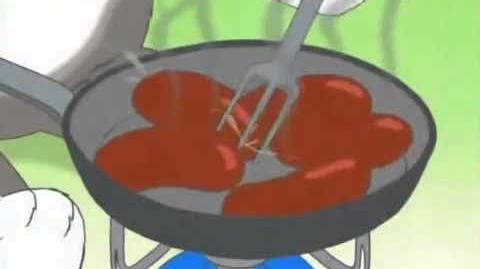 Retrieved from "https://kipperthedog.fandom.com/wiki/The_Camping_Trip?oldid=15227"
Community content is available under CC-BY-SA unless otherwise noted.