The Bleepers is the eighth episode of the first season.

Kipper is playing with his race truck on Big Hill, when he sees a spaceship is flying in the sky. Suddenly, he sees it coming to Earth. The spaceship lands on the hill and two aliens called Pink Hurdley and Purple Berry come to earth, and start speaking in an alien language that Kipper doesn't understand. The Bleepers make fun of Kipper, but the spaceship suddenly gets knocked over and turned upside down, so now the Bleepers can't return home. Pink Hurdley starts to feel sad and cry, so Purple Berry offers his bunny to Pink Hurdley so he can cheer him up. Kipper gives the bleepers lollipops (which the Bleepers call "lurdleposh"), but they choke when they eat them and eat the garbage. Kipper wants to help fix the spaceship, and he and the bleepers push the spaceship up the hill, then it flips upside up and the bleepers have to go back to outer space. A giant spaceship appears over big hill and a light goes over the bleeper's spaceship, one of the bleepers give Kipper his bunny back, then the bleepers eat some flowers and yell "Lurdleposh!" when they fade away with the light. Then the spaceship brings the other spaceship off the ground and rockets away. 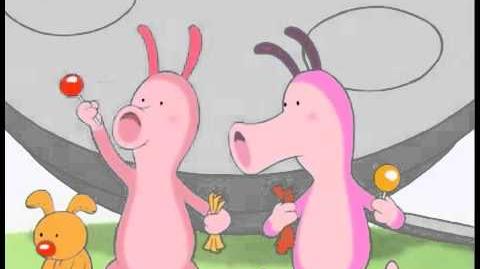 Retrieved from "https://kipperthedog.fandom.com/wiki/The_Bleepers?oldid=15282"
Community content is available under CC-BY-SA unless otherwise noted.