The Big Race is the second episode of season 6.

Kipper, Tiger, Pig, and Arnold were relaxing in a nice shady place in the sun. Then Kipper decided that the next one to say anything is a banana, so he trickled Tiger and Pig called Tiger a banana and they all laughed. Then Kipper thought they should play a game Pig thought they could pick apples from a tree, Tiger suggested they could play on the swings, then Kipper suggested the best game: a race! Tiger boasted he's very fast Kipper wasn't sure Pig was hesitant he's not good at racing so Kipper let him be the starter then Pig had an idea he had a chocolate cake it be a prize for the winner so they all agreed to start the race on big hill. Later Pig and Arnold were waiting for Kipper and Tiger Kipper made it first Arnold wanted to race too, soon Tiger arrived with his "racing gear" and ready to race he even had the perfect course: they'll race down Big Hill, across the swings, past the duck pond, then to Pig's house where the cake is waiting. Pig began the race Kipper and Tiger were off and Arnold walking far behind Kipper was ahead and Tiger was already exhausted then he had a idea he rode on his tricycle and was off. Later Kipper thought was winning when a cheating Tiger went by he boasted to Kipper about his tricycle until he splashed into the duck pond. Kipper taunted him if he was all right, but Tiger was unimpressed he asked for help but Kipper didn't want to lose the race and went away Tiger was certain he'd win and ran to the woods as a shortcut. Meanwhile, Arnold reached the pond when Jake arrived he heard about the race and gave Arnold a ride to Pig's house on his scooter, at Pig's he was asleep and didn't see Jake nor Arnold then Jake dropped off Arnold and left while Arnold went inside. Kipper meanwhile was almost there and raced in Pig woke up and congratulated him Kipper was glad he won then Tiger arrived feeling very tired he didn't even care he lost then it was time to present the cake. Then Pig was upset Arnold was here he felt terrible about letting him race Kipper suggested they'd form a search party Tiger thought was too tired to walk then there was a strange noise inside the house and the chocolate cake was gone. Kipper heard the noise under the table and who could there but Arnold with cake frosting on his mouth. Kipper said Arnold won instead, Tiger was mad there was no cake but Arnold saved some for them too, Arnold went back to his nap and everyone enjoyed Pig's chocolate cake. 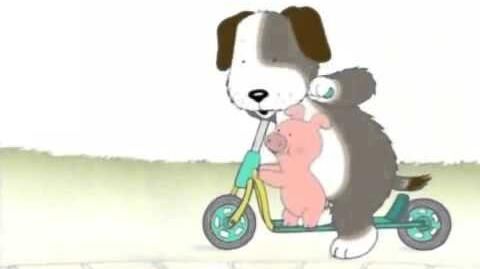 Retrieved from "https://kipperthedog.fandom.com/wiki/The_Big_Race?oldid=15151"
Community content is available under CC-BY-SA unless otherwise noted.