The Ball is the ninth episode of Season 4.

One day Tiger's phone rang it was Kipper. Tiger was bored and asked what Kipper was doing, Kipper didn't know and asked Tiger what he feels like doing Tiger didn't know he asked Kipper the same thing. Kipper was about think when someone knocked and hung up Tiger. But when Kipper opened the door no one was there...except a ball Kipper wondered who the ball belongs to (only it was a magic ball that turns up at the door). Kipper was playing with the ball, then the ball mysteriously bounced by itself. Kipper tried to make it do it again, but it didn't, then Pig & Arnold showed up. Kipper told them about the ball Pig liked it, then tried standing on it but fell. So Arnold tried and Kipper and Pig held his hands, Kipper told Pig that the ball bounces by itself but Pig didn't think so, and Kipper agreed. Then Pig whacked the ball into a tree and was stuck, so they left for the wind to help, however the ball got itself down and Arnold liked it, but when Kipper or Pig showed up the ball stopped, then it went over the wall which Arnold waved it bye-bye. Kipper and Pig wondered where the ball went Arnold tried showing them but it wasn't there. Pig said that he and Arnold were going to the park anyway, Kipper suggested they'd pick up Tiger when he remembered he left Tiger on the phone. When he got back Tiger was going to tell him that he took too long when someone was at his door, so he put Kipper on hold. When Tiger opened the door no one was there... until he saw the ball that was at Kipper's door. Tiger was going to do the same thing Kipper did. 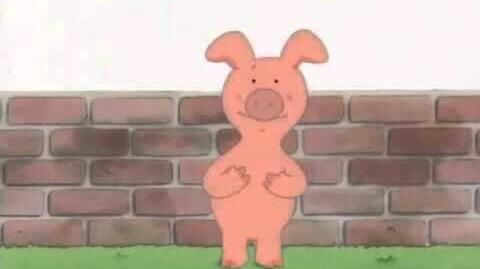 Retrieved from "https://kipperthedog.fandom.com/wiki/The_Ball?oldid=15306"
Community content is available under CC-BY-SA unless otherwise noted.