Kipper is getting ready for bed, but looks for his toys first and eventually finds slipper. As he turns off the lights and starts to fall asleep, he wakes up, saying he can’t fall asleep, despite being very tired. After a failed attempt at reading a book, he calls Tiger for advice on how to fall asleep. Tiger, who’s annoyed with Kipper for waking him up, tells him to think about something that will get him to sleep. Kipper, while in thought, starts thinking that cleaning up is boring, so he cleans his toys up in an attempt to fall asleep. After cleaning up, he tries to fall asleep again, but is woken up by a loud thunderstorm. Ages after the thunderstorm, he goes on a walk with Hippo to get himself tired, but then Tiger calls, saying that the thunderstorm woke him up, much to Kipper’s annoyance. Kipper decides to count sheep while sleeping, but a kangaroo in his dream startles him. Eventually, Kipper decides to give up and eats some breakfast, assuring he’ll get some sleep some other time. Because he was up all night, he ends up falling asleep while eating, concluding the episode. 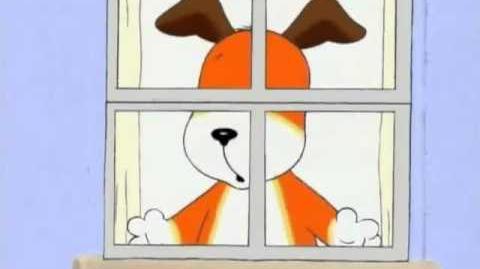 Retrieved from "https://kipperthedog.fandom.com/wiki/Sleepless_Night?oldid=15268"
Community content is available under CC-BY-SA unless otherwise noted.