Pig's Present is the fifth episode of the first season.

Pig sent invitations to Tiger, Holly, Jake, Sammy, and even Kipper. Kipper gets Pig's invitation to Pig's birthday party and see his present list; it's what pet he wants. So Kipper is gone to the pet store, he sees animals but not comfortable; The rabbit was floppy, Two guinea pigs were sleepy, a little white mouse was shy, and a stick insect was unusual. Until, he found a little hamster and Kipper bought him. When they got home, he likes the little hamster, who is always hungry. He names him "Roly-Poly". But he had to decided to give him to Pig or himself. Next Day, Kipper's plan is to give the rabbit to Pig, so he can keep Roly-Poly. But he thinks that Pig would like Roly-Poly better. So Kipper decided to wrap his cage. Until Roly-Poly went inside the tube, this gave Kipper an idea. He made an obstacle course, sets up his train set and makes Roly-Poly do a stunt, he makes him run through a tube, plunge off of a diving board, go onto a green train car, hit buffers and jump into Kipper's arms. Kipper then realizes that it is time for Pig's party, but the party is over when he gets there, and Tiger says that he is late. Kipper said he was playing with Pig's present, then he went on Tiger said " Not another one" and he and Jake laughed, Kipper meets Pig at the door and he sees that he has a lot of pets. Kipper gives Pig Roly-Poly, but Pig says that Kipper gets to take care of him. Kipper is very excited about this, until he scares away all of Pig's pets. But his loud "Yes", cause Pig's pets to hide under the party table. Luckily, Kipper found Roly-Poly and gave him a sunflower seed. Which causes him to get the hiccups. 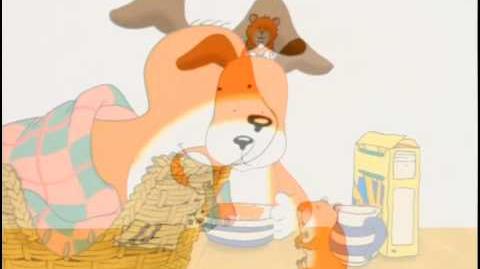 Retrieved from "https://kipperthedog.fandom.com/wiki/Pig%27s_Present?oldid=15281"
Community content is available under CC-BY-SA unless otherwise noted.