Hiccups is the fifth episode of the second season.

Kipper gets the hiccups and his friends give him suggestions on how to cure them.

Later, Kipper takes the help of a book to cure hiccups which suggest to cure it, he has to place himself in an upsid- down position and sing a song. Kipper tries it as well but again fails.

After some time, Jake suggests a Back crack might do the trick but unfortunately he fails to cure Kipper's hiccups as well and breaks kipper's back.

Lastly, Kipper calls Tiger who suggests drinking a glass of water from its wrong side. Kipper tries it as well but with no success.

The episode finally ends with Pig, Arnold, Jake, and Tiger visiting Kipper's house with drums and balloons only to find Kipper having solved his problem of hiccups. 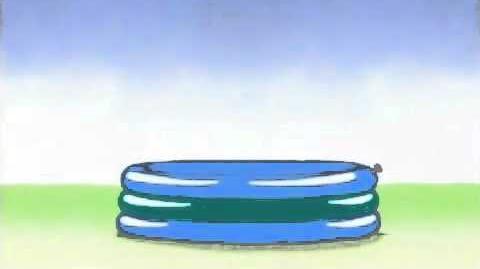 Retrieved from "https://kipperthedog.fandom.com/wiki/Hiccups?oldid=15321"
Community content is available under CC-BY-SA unless otherwise noted.