Buried Treasure is the fifth episode of Season 6.

Kipper and Tiger are drinking from juice boxes on a bench at the park waiting for Jake. When Jake comes, he says that he has a surprise for Kipper. Kipper and Tiger try to find the missing "treasure" with instructions from Jake by looking for pieces of paper that say to look somewhere. Kipper and Tiger find clues on the bridge, the duck pond and in a tree. They realize a box of cookies under the bench and they save some for Jake. Jake admits that the treasure hunt was a game for Kipper's birthday but Kipper says that his birthday is not in seven weeks and three days. Jake, who is disappointed by this, asks if he can play the game again with them on Kipper's real birthday and they eat their cake and Kipper feeds the ducks at the pond. And Tiger asks the viewers "What about when it’s your birthday?". And Kipper said "I don't know about that birthday, Tiger.''. 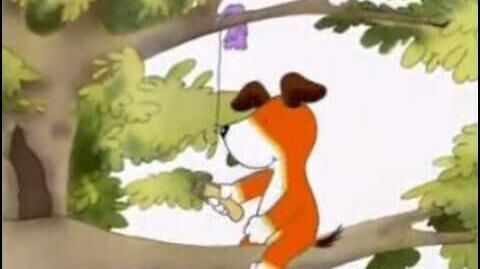 Add a photo to this gallery
Retrieved from "https://kipperthedog.fandom.com/wiki/Buried_Treasure?oldid=15316"
Community content is available under CC-BY-SA unless otherwise noted.