Arnold on wheels is the third episode of season 6.

Kipper help Arnold ride a bike, and he soon proves better than both Kipper and Tiger to the point where he knocks Pig off his bike.

The episode begins with Pig giving a ride to Arnold to Kipper's house where he is supposed to spend the day. While being with Kipper, Arnold draws a picture of a bike which prompts Kipper to take out his old bike from the store. After repairing it, both Arnold and Kipper decides to have a ride to the nearby hill. They join Tiger in the midway and race upto the hill. Arnold leads the two of them while both Kipper and Tiger knocks out each other.

The episode ends with Arnold hitting Pig with his bike while returning from the hill and both Kipper and Tiger laughing at the scene. 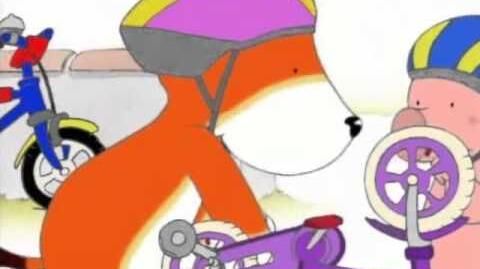 Retrieved from "https://kipperthedog.fandom.com/wiki/Arnold_on_Wheels?oldid=15296"
Community content is available under CC-BY-SA unless otherwise noted.